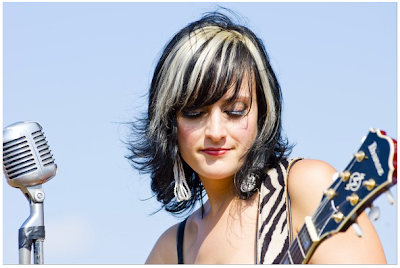 Singing from the womb, Angela picked up the guitar at fourteen and started writing songs in-between teaching herself Nirvana covers. In the backdrop of Calgary, AB, her Austrian mother and Indian father drove her to gigs as she began strumming her brand of pop-folk at local clubs, breaking into the local music scene before she had finished her first year of high school.

Playing in pop/rock outfit ”Supernal” that took her across the continent a few times, performing at festivals alongside bands like Evanescence and Sum 41, she garnered enough experience and road cred to move to Canada’s biggest city. Her recent band Drive Faster appeared in Master Tracks on AUX TV with Moe Berg and Laurence Currie at Metalworks Studio. Berg described the process as a “homerun” and during the episode says, “The vocalist is just so outstanding. You almost get a rush when you are recording someone like that.”

With a notebook full of songs and frequent gigging as an acoustic solo artist, Angela decided to take her songs electric and got the attention of Johnny Fay, drummer for The Tragically Hip. Demo sessions together resulted in pre-production for a solo record. Runner-up for Best Female Artist in the 2010 International Acoustic Music Awards for her song "Nurse Me Back to Health" (Dear Diary), the debut EP Cake and Callouses was released April 2012. Two cross-Canada tours and a Toronto Independent Music Award nomination later, Angela is poised to release Leap, her follow-up EP filled with songs about self-renewal, empowerment, love and life.

Posted by Bookshelf Blogs at 12:20 PM